PANS, PANDAS, and Autism: Different Faces of the Same Disorder 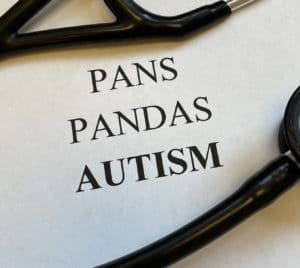 The last few decades have seen an alarming increase in acquired neurological disorders among children.  Children are increasingly developing conditions such as autism, developmental delay, sensory problems, emotional disorders, attention disorders (ADD/ADHD), post-concussion syndrome, tics, Tourette’s syndrome, and PANS, and PANDAS.  Acquired neurological conditions developed after birth and are view differently from congenital disorders that may have a genetic component or have occurred before birth.

Consequently, researchers are grappling to understand each of these conditions, but unfortunately, they often focus on individual disorders and not the bigger picture.  There is little to no research on understanding why such a large variety of neurological conditions are increasingly affecting children over the same time frame.

When assessing an individual who develops a variety of symptoms within a relatively narrow timeframe, a physician is trained not to view each problem or symptom separately but to look for a single cause that might be responsible for all their symptoms.  Applying the same logic to the increase of the acquired neurological issues in children, I think small intestine bacterial overgrowth (SIBO) could be the single common factor contributing to all of these conditions. 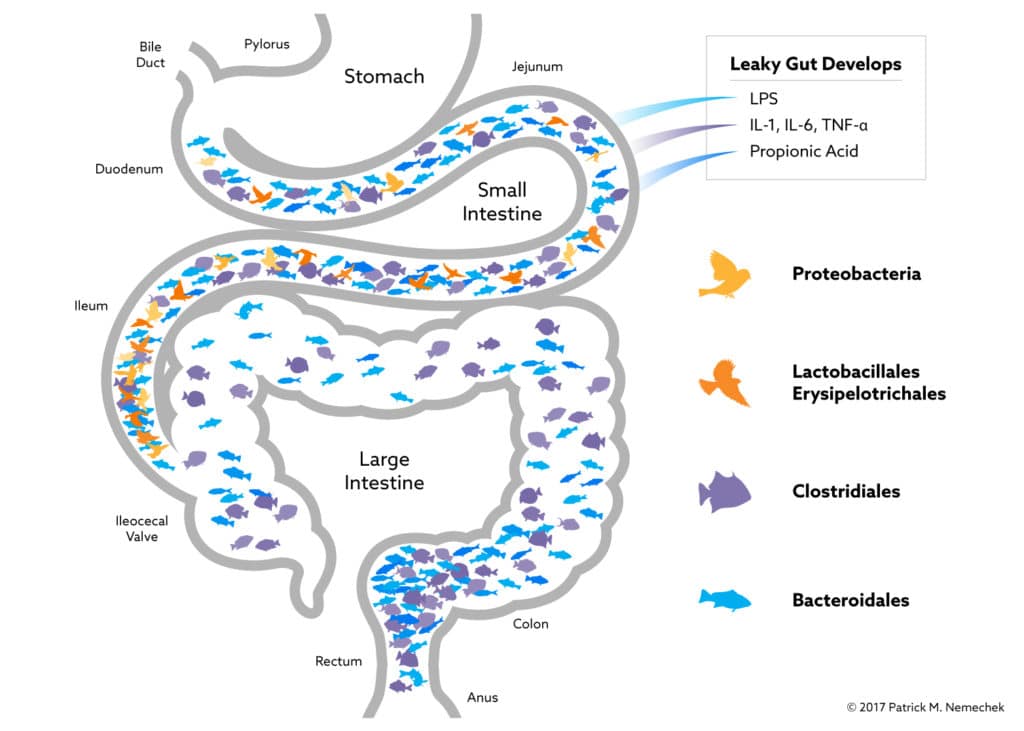 The small intestine wall disruption is referred to as bacterial translocation (i.e., leaky gut) since only bacteria cause this. Yeast (i.e., fungi, Candida), viruses, and protozoa (i.e., parasites) may grow in excess within the small intestine, but there is no evidence they contribute to the leaky gut problem.

I can explain SIBO’s ability to trigger various neurological disorders in children through two factors, the age when bacterial overgrowth first occurs and whether or not the overgrowing bacteria can produce a behavior-altering substance such as propionic acid. 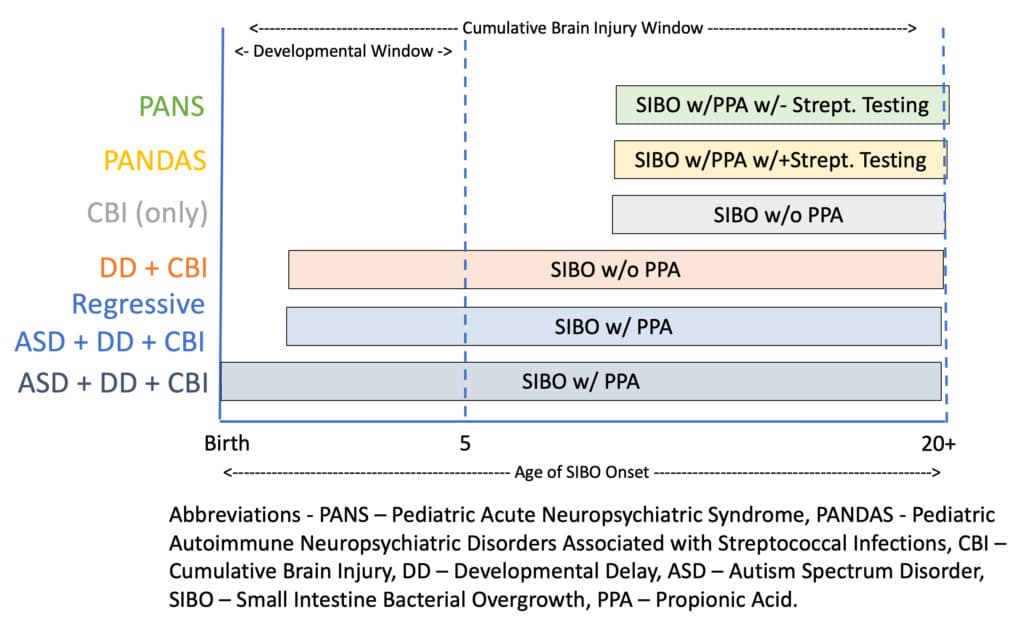 Inflammation from SIBO can prevent the brain from repairing itself after an injury and results in residual neurological damage remaining after each injury.  Over time, the unresolved injury from repeated traumas will build on top of each other, resulting in a cumulative brain injury or CBI phenomenon.

Increased levels of Thirst or Hunger

Unlike the pruning process, cumulative brain injuries can occur throughout the entire life span. Therefore, whether or not the inflammation from SIBO occurs before or after age five, CBI increases with each additional injury.

SIBO Before 5 Years of Age

Propionic acid (PPA) is found in high concentration in the tissues of children with advanced autism and has a sedating, and at times almost hallucinatory, effect on the children. The production of PPA is dependent on the specific colonic bacteria that is overgrown within the small intestine.  Since not all colonic bacteria produce propionic acid, the excess production of PPA depends on whether or not the overgrowing species is capable of excreting it. If the overgrowing bacteria produce PPA, the child will have a decreased level of awareness, poor eye contact, and may engage in strange behaviors such as staring transfixed at spinning objects.

Effects of Propionic Acid in Children

Preference to Be Alone

In a child younger than five years old with SIBO with a PPA-producing species of bacteria, that child will have developmental issues, cumulative brain injury symptoms, and behaviors uniquely associated with autism.  If younger than the age of five when SIBO occurs with a bacteria that does not produce PPA, then the child will not have these unique autistic behaviors and will only be diagnosed with developmental delay and cumulative brain injury.

SIBO After 5 Years of Age

After the age of five, the occurrence of SIBO without PPA production will result in cumulative brain injury symptoms and no developmental issues.  In the event the child is older than five years old, SIBO occurs with PPA-producing bacteria, they will manifest in conditions commonly referred to as PANS (pediatric acute-onset neuropsychiatric syndrome) or PANDAS (pediatric autoimmune neuropsychiatric disorder associated with streptococcal infections).

The symptoms commonly felt to be associated with PANS and PANDAS both consist of high levels of anxiety, often resulting in obsessive-compulsive behaviors (i.e., OCD) and a variety of other neurological and psychiatric symptoms.  The main difference between the two is that PANS has a rapid onset, often within 24-48 hours. In contrast, PANDAS does not develop rapidly and is associated with the colonization of streptococcal bacteria in the pharynx (i.e., a positive strept throat swab).  Both PANS and PANDAS can mysteriously disappear as quickly as they appear and then reappear months or years later.

I believe both PANS and PANDAS are simply the occurrence of SIBO with PPA-producing bacteria and are not separate medical conditions. In animal studies, SIBO increases anxiety-like behavior, and I have witnessed this same effect in my private practice.  A subset of my adult patients will also experience high levels of anxiety after SIBO develops. The anxiety can rapidly resolve after treatment of SIBO with rifaximin (Xifaxan®).  Many of these adults had their anxiety initially escalate very rapidly after an infection, a course of antibiotics, surgery, or a brain injury, all of which are well-known triggers of SIBO.

The confusion with PANS and PANDAS is that the spontaneous resolution of these conditions after a course of antibiotics lies in commonly used antibiotics such as amoxicillin or trimethoprim/sulfamethoxazole have a 20-30% chance of reversing SIBO. Thus, their use can sometimes lead to rapid improvement of symptoms and even result in complete remission of symptoms sometimes.

Suppose a physician managing child with PANS or PANDAS is not tracking every single course of antibiotics that any other physicians might have prescribed the same patient for a routine middle ear or dental infection. The common antibiotics used in these instances can reverse SIBO and trigger an improvement in the patient’s PANS or PANDA symptoms. The physician commonly misses the real reason for the child’s improving symptoms and considers their progress as “spontaneous” or a consequence of some other treatment (vitamins, homeopathy, heavy metal therapy, etc.).

Also, the diagnosis of PANDAS requires the presence of a positive streptococcal throat test or culture in children.  Approximately 10% of all children within the U.S. are carriers of harmless strains of streptococcus, test positive with rapid strep tests or throat cultures, and do not have any symptoms.  Infectious disease specialists advise against treating these children with antibiotics because they are often incapable of clearing the streptococcus and do not benefit their health.

Because of the high carrier rate, 10% of any group of children with any common disorder will carry streptococcus. Because of this, streptococcus can mistakenly be linked to almost any disease process using this logic. What further leads physicians down this path of mistaken therapy is that prolonged courses of antibiotics they treat children with can partially suppress SIBO and reduce PPA production, resulting in some improvement in the child’s symptoms.

The faulty logic of “giving antibiotics for streptococcus bacteria leads to improvement; therefore, the problem is caused by streptococcus” is understandable but incorrect. Treating the same child with rifaximin has a better and longer-lasting positive response. And since rifaximin does not enter the bloodstream, the positive impact from rifaximin cannot be because it cleared the throat’s streptococcus infection.

While I agree that children diagnosed with PANS or PANDAS have excess inflammation within their brains, I disagree that this is an autoimmune process; the children suffer from an autoinflammatory process.  Inflammation from an autoimmune process targets specific types of tissue in the body. For example, rheumatoid arthritis is an autoimmune disorder in which inflammation is primary located in just a few particular joints of the hands.  Think of autoimmunity as a sharpshooter who can hit the center of a bullseye when shooting a bullet without damaging other bodily systems.

Autoinflammation is the release of inflammatory chemicals into the bloodstream, and these chemicals have wide-ranging adverse effects on the tissue of the body. In the case of the hands, almost all the joints of the hand would hurt, and not just a specific few joints as seen in rheumatoid arthritis.  Instead of a sharpshooter, think of autoinflammation as a shotgun that cannot hit just the center of the target but instead scatters its effect across a much larger area.

When SIBO is present, the leakage through the small intestine walls can activate up to 80% of all white blood cells. These cells, in turn, release inflammatory chemicals called cytokines into the bloodstream and potentially harm any cell from head to toe.

Besides, reversal of SIBO with rifaximin causes a rapid reduction in autoinflammation and PPA levels and results in the sudden improvement of my patients mistakenly diagnosed with PANS and PANDAS.  Historically, the treatment of most autoimmune disorders results in a slow reversal of a patient’s symptoms.

The Effectiveness of Nemechek Protocol®

I have assisted in the care of almost 700 children with autism, developmental delay, sensory issues, and cumulative brain injury, many of which had been previously diagnosed and treated for PANS or PANDAS.  The Nemechek Protocol® is solely focused on reducing inflammation and most notably through the reversal of SIBO using either the prebiotic fiber inulin or the non-absorbable antibiotic rifaximin.

My protocol allows more than 90% of the children under my care to maintain a rate of neurological recovery that parents, teachers, and therapists find unequaled.  My protocol’s true power and success lie within the human body’s natural ability to neurologically recover if the body is maintained in a healthy, non-inflammatory state.

I am an internal medicine physician, and my Internal Medicine and Autonomic Medicine practice are in the Phoenix, Arizona area. For additional information, go to AutonomicMed.com.

This post is provided as an information resource only and is not to be used or relied on for any diagnostic or treatment purposes.  This information is not intended to be patient education, and it does not create any patient-physician relationship.

Send this to a friend