Tingle Face (dysautonomia): What is it and what should you do? 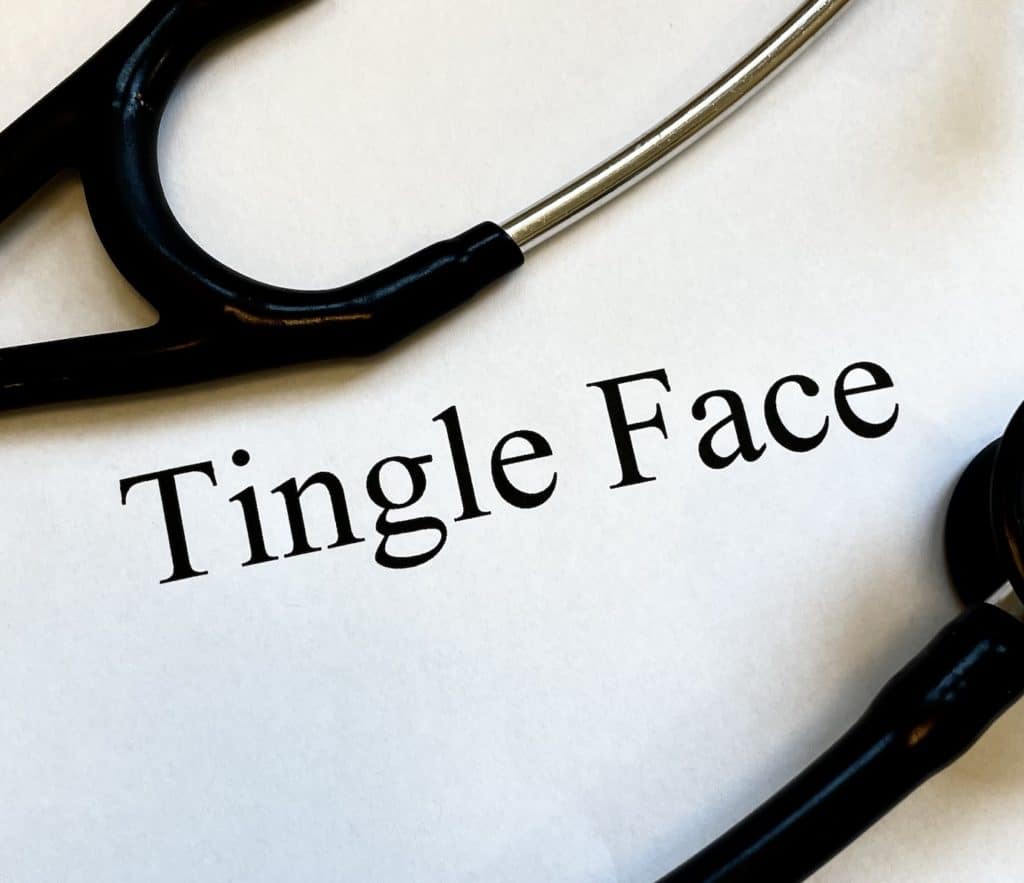 Sometimes when people feel sleepy and hungry, or maybe they feel restless or anxious, they may also feel a strange tingling sensation in their face, neck, hands, and arms. They will describe it as a sensation that feels like they had been to the dentist hours earlier and the numbing medicine was wearing off, their hands or face fell asleep, or they are a little sunburned. Sometimes people fear it is the beginning of a neurodegenerative condition like Parkinson’s, but often it is just autonomic nervous system dysfunction (dysautonomia).

I call it “Tingle Face.”

The nerves within the autonomic nervous system are the brain’s master control mechanism for the entire body. The autonomic nervous system has two main branches.   There is the Sympathetic branch (“fight or flight” commands) and the Parasympathetic branch (“rest and digest” commands). The two branches work together like children playing on a seesaw, constantly balancing the effect each other has in response to the stress placed on the body throughout the day. But when one branch is too strong or the other is too weak, many symptoms become noticeable. The symptoms may range from merely irritating to debilitating, depending on the degree of the autonomic dysfunction.

What is the function of the autonomic nervous system?

The autonomic nervous system controls every organ in the body, including the heart, bladder, stomach, intestines, and kidneys. Our brain regulates blood pressure, blood sugar, sleep cycles, the immune system, and hormones. The autonomics also control many smaller functions, like when our pupils dilate, hiccups, and the adrenaline produces nightmares.

To understand what causes dysautonomia or “tingle face,” we first need to know how the brain commands blood pumping out of the extremities against gravity. The brain uses the autonomic nervous system to coordinate and control the heart, kidneys, hormones, and blood vessel tone to regulate blood pressure.

When we stand up from a chair, the Sympathetic branch increases activation and causes the arteries and veins in the legs to constrict. In contrast, the Parasympathetic branch relaxes, which is key to pumping blood out of the lower extremities. When the autonomic seesaw functions perfectly in this effort, the blood flows into the brain and organs correctly, and the person feels perfectly normal.

What happens with the autonomic system doesn’t function properly?

When the autonomic seesaw is no longer working perfectly, the blood flow into the brain is inadequate, and people experience low cerebral blood flow against gravity. The person may feel dizzy or lightheaded, creating a tingling sensation or numbness in the hands, arms, neck, throat, or scalp. This inappropriate response to the gravitational challenge upon standing is called Orthostatic Dysfunction, an autonomic nervous system problem.

What are the five stages of autonomic dysfunction?

There are five stages of Autonomic Dysfunction, and the first two stages do not have noticeable symptoms. In the third stage, people experience symptoms that affect their daily life, like GI trouble, sleep trouble, headaches, temperature regulation problems, or dizziness.

The autonomic nervous system may be damaged in a direct trauma such as a concussion or indirectly (graveyard shifts). Still, it may be silently injured, including metabolic injuries (pregnancy, adverse drug reaction, chemotherapy, radiation) or inflammatory injuries (Covid-19 infection, excessive vaccine reaction, heat stroke, intestinal bacterial overgrowth). The Autonomic damage may happen in a single trigger event, or the Autonomic injury may occur over time from accumulating smaller, seemingly harmless events.

What is metabolic inflammation?

Frequently, the brain cannot repair the damage because of an underlying form of stress called metabolic inflammation. Metabolic inflammation is the abnormal release of inflammatory chemicals from the immune system that prevents stem cells and other restorative mechanisms from repairing damage in the brain and throughout the body.

Symptoms of dysautonomia or a Damaged Autonomic Nervous System

Many symptoms may begin when the Autonomic Nervous System is damaged (dysautonomia). Autonomic damage may cause heartburn, bloating, constipation, and bladder dysfunction, and it contributes to chronic inflammatory conditions such as autoimmune disorders, chronic arthritic pain, eczema, and neuropathy.

How to Improve Dysautonomia

Over the years, through investigative trial and error, I discovered noninvasive ways to reverse autonomic nervous system dysfunction in my adult patients, which was granted a U.S. Patent in 2019 (No. 10,335,396). Now that I know how to get my patients’ autonomics to improve or recover, physical testing is no longer necessary because the patient’s symptoms tell me how well they respond to the Nemechek Protocol.

In patients already experiencing symptoms of Autonomic Dysfunction or who have already been diagnosed with a chronic disease, a treatment protocol to improve autonomic function ultimately works to reverse the brain injury, halt their symptoms, lower their risk of premature death, improve their response to therapies and helps them get off medications that mask their underlying symptoms but do nothing to cure their problems.

Contact Dr. Nemechek for more information on autonomic nervous system dysfunction and possible improvement or recovery, or order the book, The Nemechek Protocol.