There is No Single Best Diet for Everyone 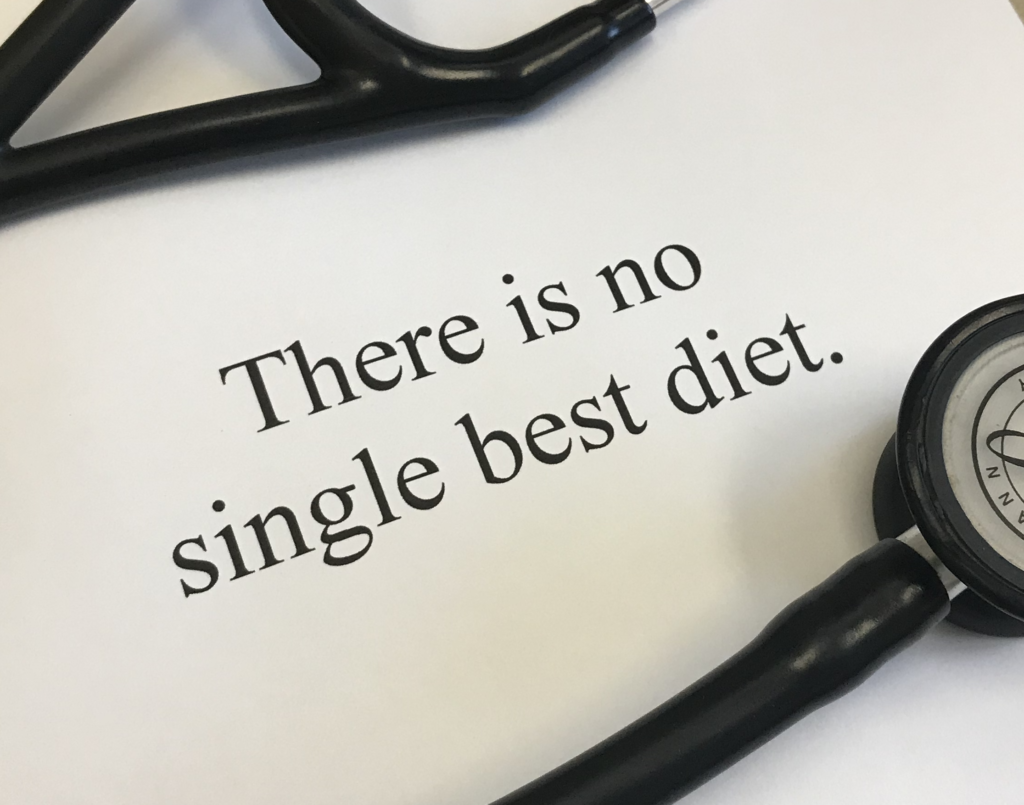 The human body requires essential vitamins, minerals, fats, and proteins, and all of these nutrients can easily be obtained from either a plant-only diet, a meat-only diet, or any combination in between.

In other words, humans were engineered through evolution to survive on whatever food was available.  In these modern times, with a wide array of food available to us at all hours, people often ask me to tell them what diet they should follow.

My answer is a long one because there is no single best diet for everyone.

We Are Broken in Different Ways

In the first portion of the last century, the way we prepared and processed our foods changed simply out of the immediate need to feed a growing global population.  We needed more food, and we wanted it quickly and cheaply.  Foods were prepared in larger quantities and often by using higher temperatures to cook them faster.

Preservatives were invented to prevent spoilage during shipping and storage. We even ‘invented’ food items to replace others less expensively (e.g., margarine replaced butter, soy oil replaced lard or ghee).

As an unintended consequence of these ‘advances’ in food manufacturing, the introduction of some chemicals, processed food production methods, and plastics have inadvertently caused damage to the human body.

In particular, the damage has resulted in the human body being less able to regulate body fat, blood sugar, inflammation, and other factors involved with metabolism.

The areas of the body most vulnerable to these negative effects are the hypothalamus, the autonomic nervous system, our intestinal bacteria, and the immune system surrounding the intestinal tract.

The damage one sustains to their physiology can vary widely depending on an individual’s degree of exposure, environment, genetics, and mother’s exposure to these things during pregnancy.  These differences influence how some foods or some eating patterns may positively or negatively affect one person versus how they affect another person.

One example is how some people have to reduce a variety of foods from their diets (nightshades, carbohydrates, or gluten) in order to feel well. In contrast, other individuals can eat these same foods and actually feel better than if those foods were avoided.

The differences between the two reactions to foods by different people are due to the differences in the past damage they have sustained to their metabolic functioning.

There are various reasons why one would suggest a certain eating pattern over another.  As a physician, my recommendations are based on improving specific medical phenomena to help improve a patient’s well-being.

My recommendations are based on a single important overriding goal: lowering the level of systemic inflammation within an individual’s body.

Systemic inflammation is probably one of the single most important health risk factors in that it fuels almost all forms of non-infectious and non-traumatic death.  It is referred to as metabolic inflammation and is estimated to be the cause of death for approximately 60% of the global population.

Reducing inflammation improves the quality of life and longevity by reducing one’s blood pressure and the risk of heart disease, strokes, cancer, and diabetes.  It also reduces the risk of neurodegenerative disorders such as Alzheimer’s, Parkinson’s, and Macular Degeneration.

My goals are to help my patients adapt as many of the following dietary behaviors into their lifestyle as possible:

I will break down my instructions from the simplest to the more complicated ones to implement in one’s daily routine.

Protect Yourself from Omega-6 Fatty Acids

I have broken down a few types of different eating patterns or styles and how they can help make an individual feel better. This list is not complete but just examples of how I look at different approaches.

Benefits of a Low Carbohydrate Diet (Less than 100 grams per day):

Benefits of a Vegetarian Diet:

Benefits of a Mediterranean Diet:

I hope you find this overview helpful in understanding how I approach dietary recommendations as a physician with a significant background in clinical nutrition.

As you can see, I do not make a single recommendation that you should eat or you should not eat this or that particular food.  This is because there is no evidence that certain foods are innately more or less healthy for us to eat.

Unfortunately, most of us have been metabolically damaged in our own unique way, and each of us needs to craft our own unique way of eating.  We need to learn to eat foods that do not cause any uncomfortable symptoms and can lower the risk of illness by lowering systemic inflammation.

I am an internal medicine physician (D.O.) from UCLA, and my Internal Medicine and Autonomic practice is in the Phoenix, Arizona, area. For additional information, go to AutonomicMed.com.

This post is provided as an information resource and is not to be used or relied on for diagnostic or treatment purposes.  This information is not intended to be patient education and does not create any patient-physician relationship.